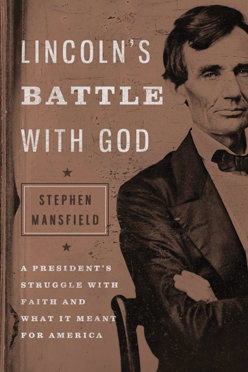 Like most Americans, I love Lincoln. I love his humor, his wisdom, his inspiring ascent to the White House, and the glory of his words. As I earned my degrees in history, I came to realize that there were two widely differing views of Lincoln’s religious life. Scholars tend to portray Lincoln as an unswerving and cynical atheist, and others see him as the zenith of Christian statesmanship. Through my research, I came to believe that both views are wrong. Lincoln was neither atheist nor model Christian.

Instead, Lincoln was a man ever on a spiritual journey—a poignant, painful, ultimately transforming journey. It was a journey that shaped our country and, I believe, still has power to change all who learn of it.

“Stephen Mansfield does a wonderful job of walking us through our greatest president’s spiritual journey, and along the way he reminds us that faith has always been at the center of the American story.” – William J. Bennett and John T.E. Cribb, coauthors, The American Patriot’s Almanac