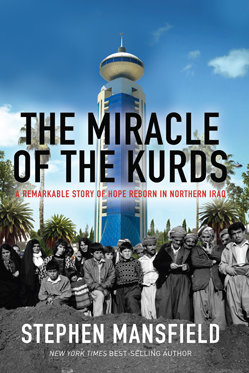 The Miracle of the Kurds

I am moved by the Kurdish people. I’ve had the privilege of knowing Kurds in the United States and of traveling often through Kurdish regions of the Middle East. I’ve sat with welcoming Kurds in Europe, and I’ve also watched the Kurds stand nearly alone against the evils of the Islamic State. I’m touched by their sufferings. I’m made better by their courage. I’m also made hopeful by the fact that the Iraqi Kurds who are the subject of this book are a largely pro-democracy, pro-western, and pro-Israel people in the belly of the Middle East.

I did not write this book because I am an expert on the Kurds. I wrote it because I am an admirer of the Kurds and I wanted to urge my fellow Americans to admire them, too. I believe the Kurds point a way out of the darkness in the Middle East and I feel privileged to tell a bit of their story.

“Stephen Mansfield simplified a complex history of the Kurds yet kept it accurate. His personal experiences added an enriching layer to the layers of history, politics, internal struggles, and atrocities inflicted upon the Kurds…Yes, they have jam!” – Amazon Reviewer